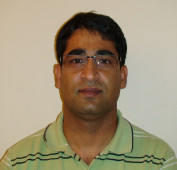 Transcription is the first step in gene expression where most regulation occurs. RNAP core enzyme together with sigma factor(s) and/or numerous regulator(s) orchestrates the gene expression in bacteria. Our lab seeks to characterize the interactions among RNAP, sigma factors, and regulators required for various gene expressions in prokaryote, e.g. Escherichia coli, Bacillus subtilis and Mycobacterium tuberculosis. The proposed work will use integrated biophysical, biochemical and genetic approaches, along with a recombinant in vitro transcription system to address the following specific aims:

1. Mechanism of gene regulation by various transcriptional factors and sigma factors in prokaryote.

Novel mechanism of gene regulation: the protein Rv1222 of Mycobacterium tuberculosis inhibits transcription by anchoring the RNA polymerase onto DNA.

We propose a novel mechanism of gene regulation in Mycobacterium tuberculosis where the protein Rv1222 inhibits transcription by anchoring RNA polymerase (RNAP) onto DNA. In contrast to our existing knowledge that transcriptional repressors function by either binding to DNA at specific sequences or by binding to RNAP, we show that Rv1222 mediated transcription inhibition requires simultaneous binding of the protein to both RNAP and DNA.  The proposed mechanism by which Rv1222 inhibits transcription reveals a new repertoire of prokaryotic gene regulation.

The transition from the formation of RNAP-promoter open complex step to productive elongation complex step involves ‘promoter escape’ of RNAP. From the structure of RNAP, a ‘promoter escape’ model has been proposed which suggests that the interactions between sR4 and RNAP and sR4 and DNA are destabilized upon transition to elongation. This accounts for reduced affinity of s to RNAP and stochastic release of s. Using a two- component s factor YvrI and YvrHa from Bacillus subtilis that independently contribute to the functions of sR4 and sR2 in a RNAP-promoter complex, we show that YvrI, that mimics sR4, is released gradually as transcription elongation proceeds whereas YvrHa that mimics sR2 is retained throughout the elongation complexes. Thus our result validates the proposed model for promoter escape and also suggests that promoter escape involves little or no change in the interaction of sR2 with RNAP.